As mentioned in the Short description, the Katipō has the ability to induce several senses (curiosity, movement, speed, excitement and relaxation) that these senses can be transmitted to the audience individually or as a set of emotions. This ability for such a product at such a level can be considered an innovation.
In choosing the name of the chandelier, much attention has been paid to the harmony between the form nature of the product and the written and spiritual nature of the name. The most important sign of this harmony is the last letter of the noun (ō), if the audience looks up while sitting under the chandelier, they will find this harmony. I have shown it in picture 6.

The rod and box that attach the chandelier to the ceiling and rods and arms that attach to the lights at the end, are made of metal, and they are all black.

The central part of the quasi-oval is made of completely clear and colorless glass. It also has a very glossy and smooth texture. With these features, it can receive the colors of the environment and the warm color of the lights together and show a combination of them to the audience in a wavy way, and perform its main task, which is to create a sense of curiosity.

The lights are LED panels and are used in both circular and linear modes. The emission of warm lights in two modes of illumination of 2000 or 3000 K, can be selected by the customer. It should be noted that the lights are covered with semi-opaque glass.

The first issue; The lights are designed so that they are not too bright or too dark and emit a normal amount of light. Such eyes of the user are not damaged.

The second issue; The human eye receives and sees warm light more easily than cold light, meaning it spends less activity and energy observing warm light, resulting in reduced eye fatigue. For this reason, warm lights have been used in the design of the product.

The last issue; The angle of the lights is designed in such a way that when a person sits under a chandelier, the light emitted from the lights does not shine in front of and behind the audience. Because in case of radiation from the front, the light hits the eyes directly and in case of radiation from behind, it reduces vision. It should be noted that the presence of semi-opaque glass coating that covers the lights contributes to the ergonomics of this process.

Connections; The connection of all metal components to each other is done by welding. The upper box is attached to the ceiling with bolt and nut connections. Also, because it is made of metal, it is connected to the vertical central bar by welding and finally connects the whole chandelier to the ceiling. The circular LEDs are connected to the ends of the metal rods through bolt and nut connections, and only the existing linear LED is connected to the rod through the rail connection. The metal rods are shaved at the end and have external grooves. The semi-opaque covers of circular LEDs are also shaved on the inner surface and have grooves. In this way, the semi-opaque coatings and the ends of the metal rods are twisted and tightly connected. Small circular veneers that are attached to the rod on both sides are shaved on both sides and have internal grooves.
The connection of the linear semi-matte LED cover is also a rail
connection.
Production method; The central part of the quasi-oval glass is made by injection molding, which is a kind of wax molding.

The height of the chandelier from the ceiling is 250 cm and its
dimensions are 120 in 500 cm. More details are given in picture 6.

In spite of all the above, in the end, one of the main tasks of the chandelier is to be able and useful in the amount of lighting in the environment, which eliminates the need for other products. For this reason, this product has good power.

It should also be noted that an important issue that has been considered in the chandelier design process is the impact of the product on the user and its overall benefit to society. For this reason, the product has features that, in addition to relaxation, also have an exciting atmosphere. This is especially important in the presence of coronavirus, because this product always tells a new story to the user by showing colors and enjoying staying at home. 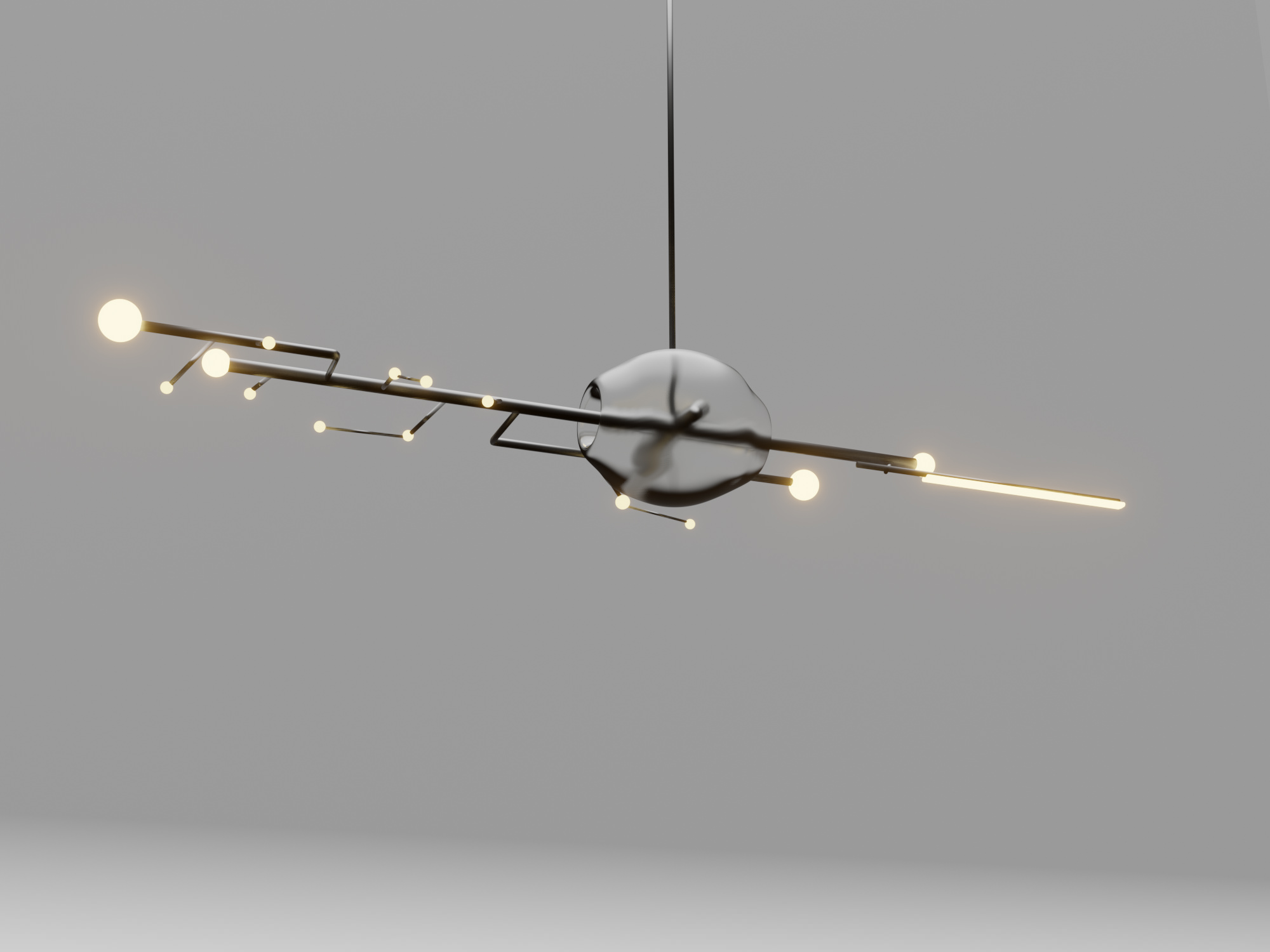 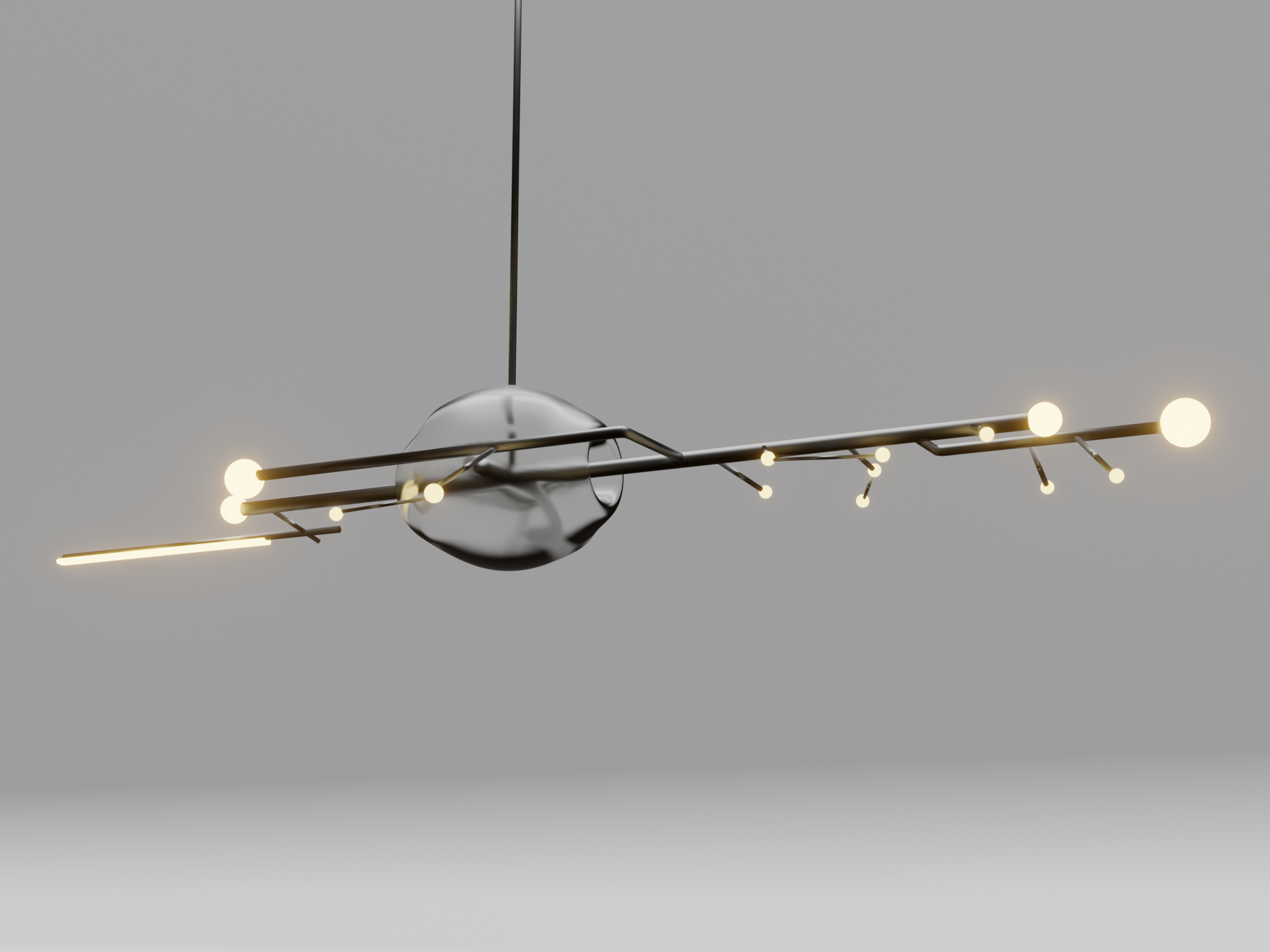 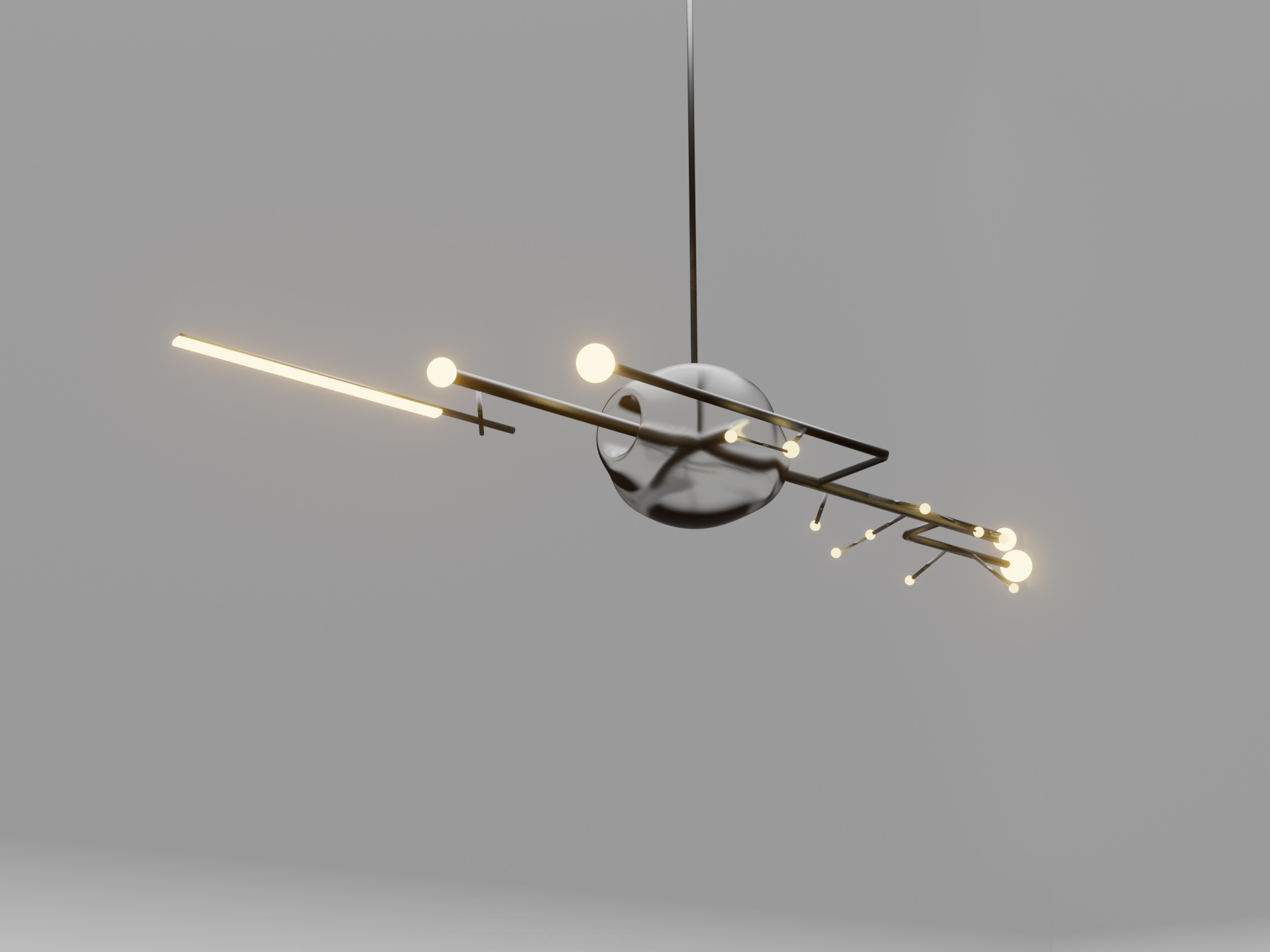 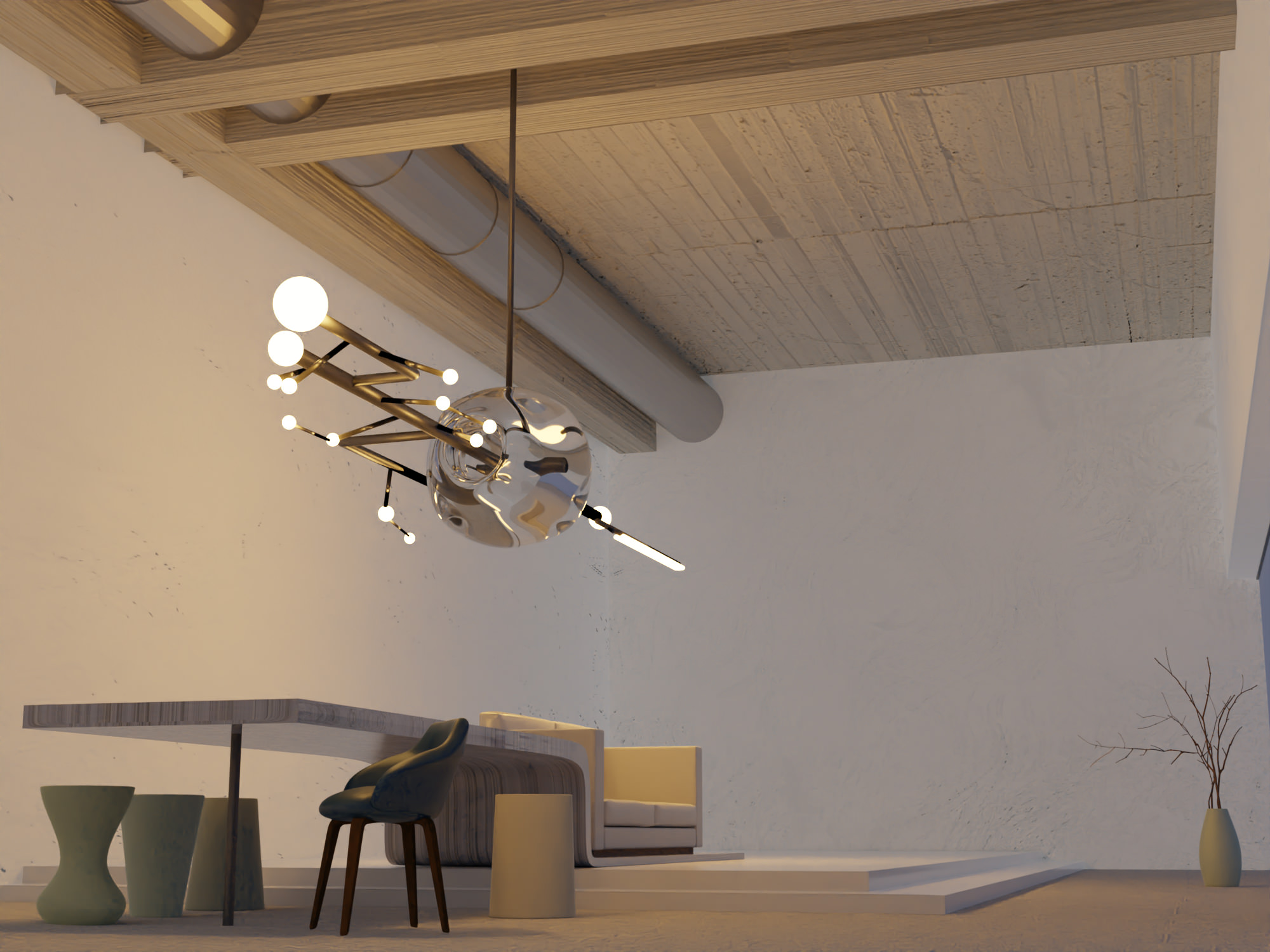 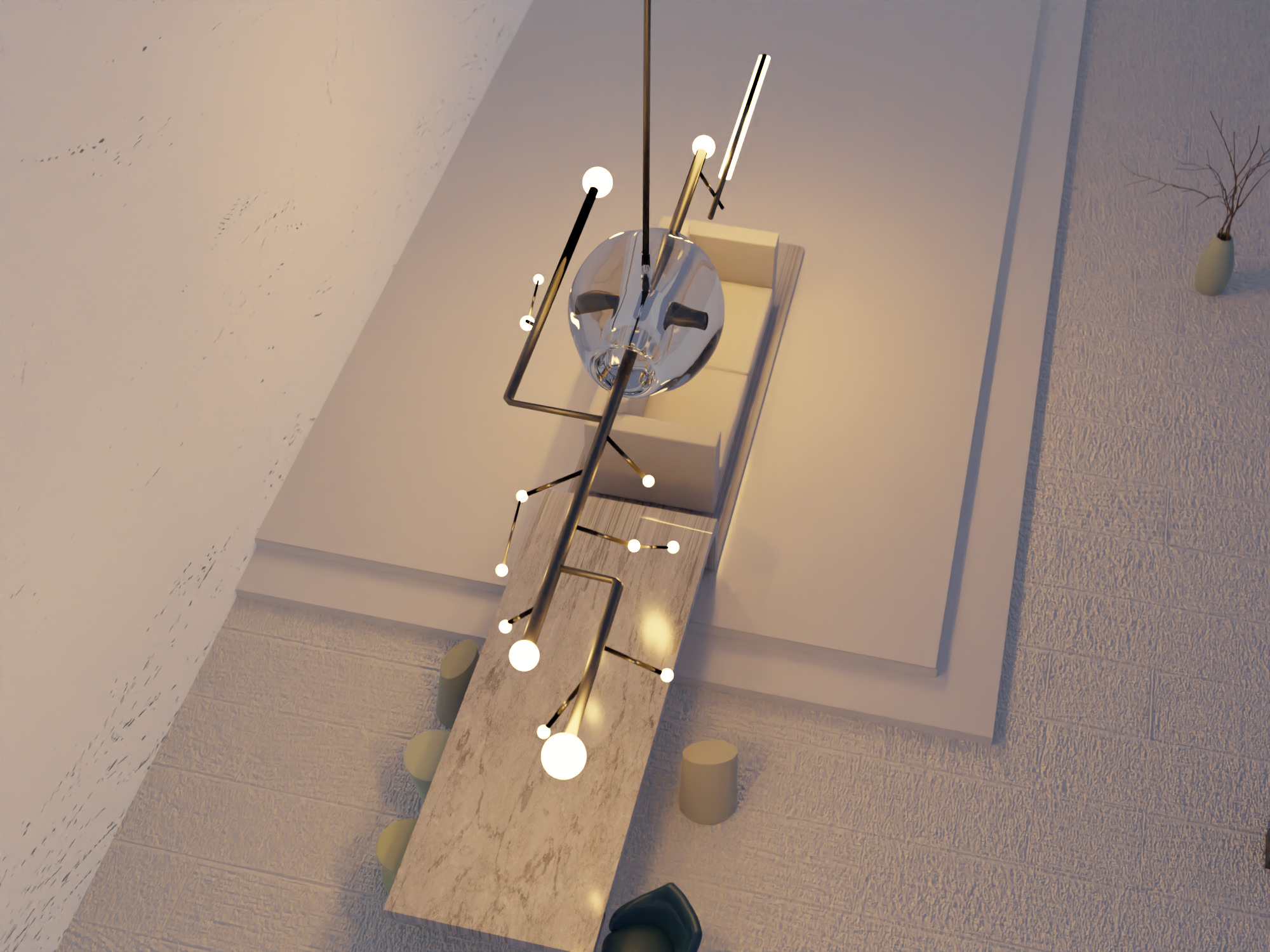 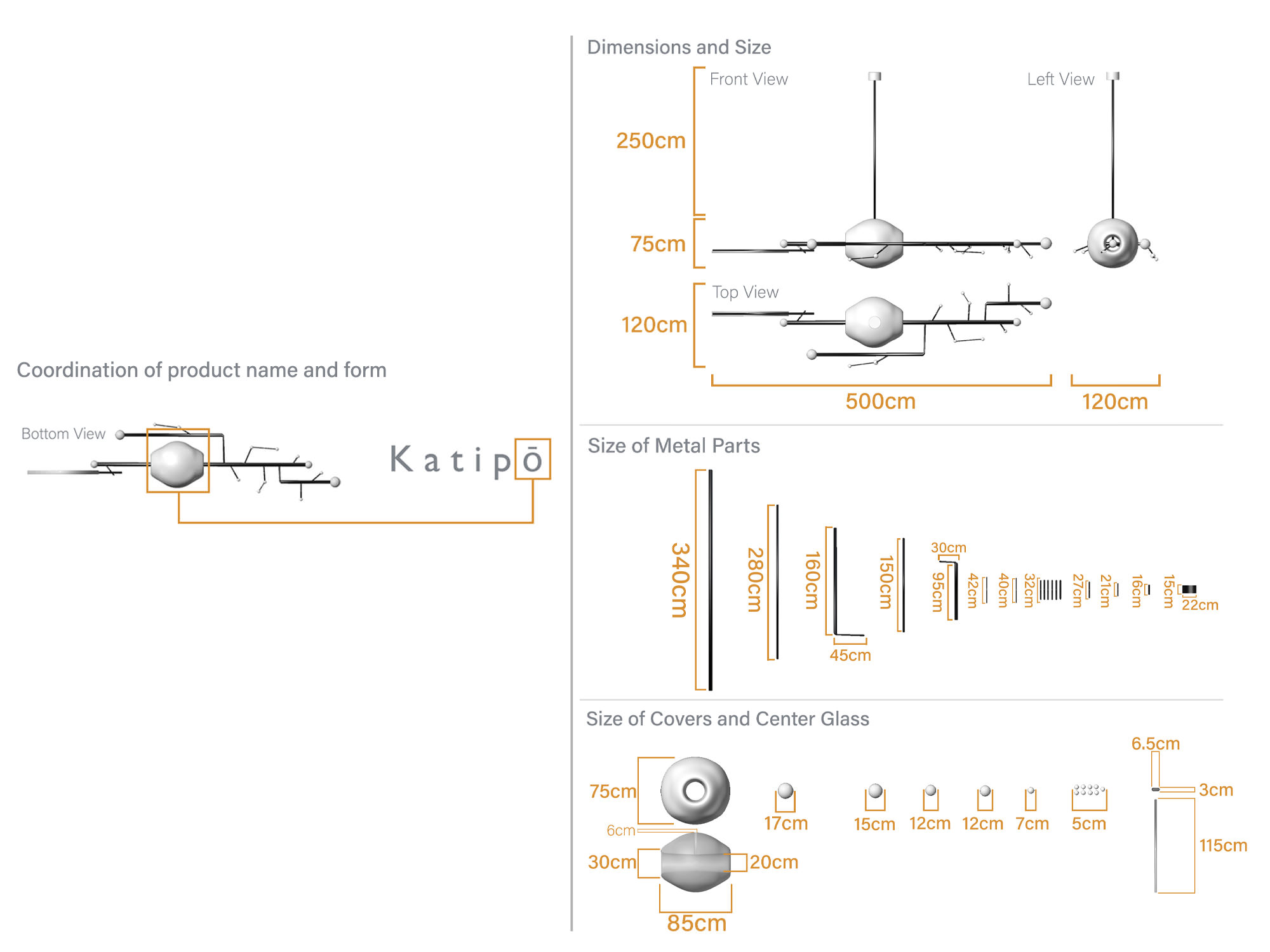 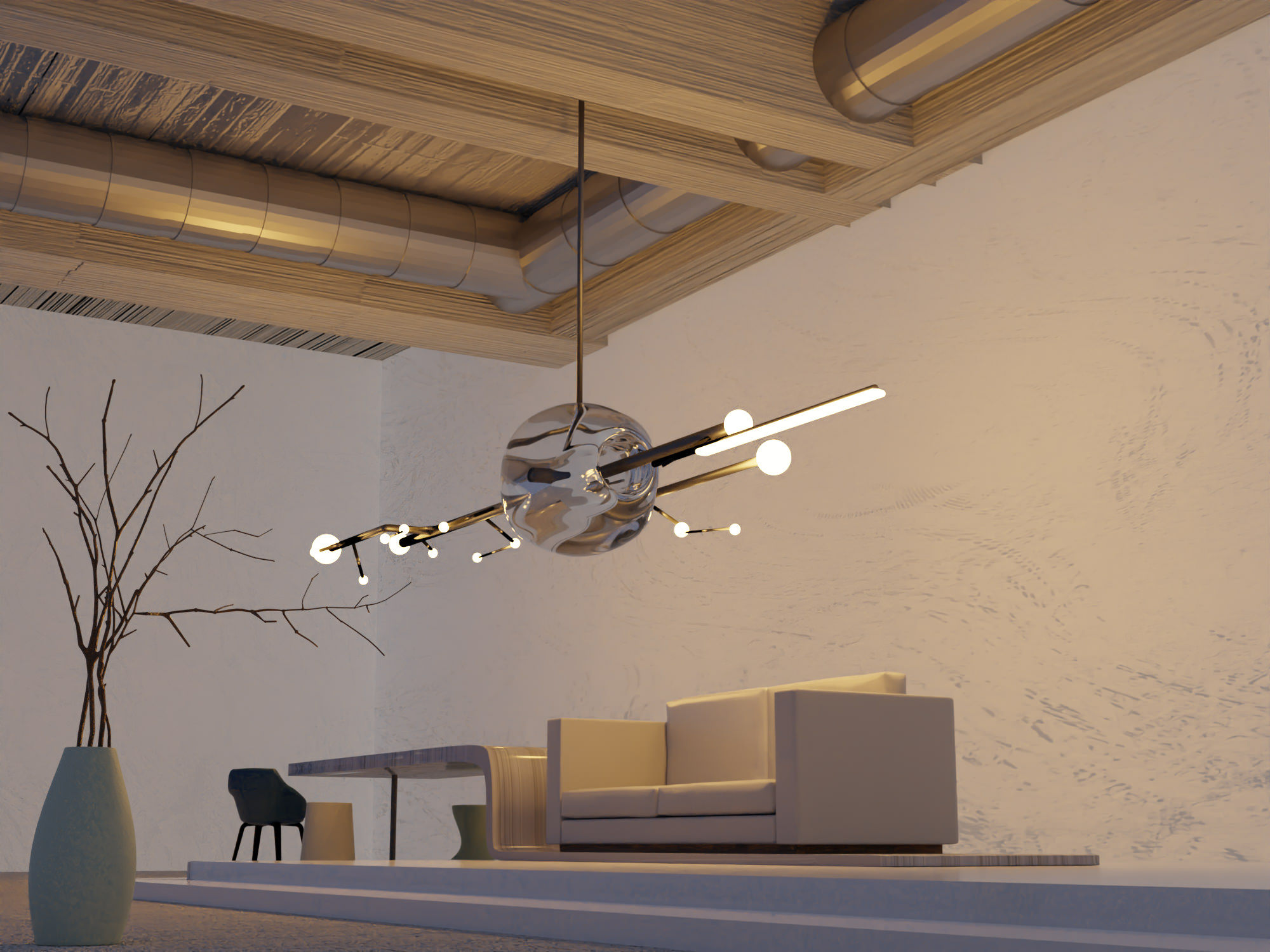