The interiors of “CALIFORNIA American style Asian restaurant” are filled with symbolic elements typical of the American and Asian cultures.

In terms of reflecting the Asian one, the colour of the interior is close to the ethnic wabi-sabi (use of natural materials): stone, marble, onyx! Also, a flooded floor with stains resembles wet sand.
The same associations are suggested by round tables with the effect of circles embedded one into the other.
A red table, clear appeal to Chinese restautant culture, is placed between two massive columns with typical ornamentation, while the narrow common table by the bar, illuminated with yellow and turquoise lighting, suggests the idea of expensive Asian bars from James Bond movies.

There are also symbols of the American culture: the design of the ceiling symbolizes the Californian skyscrapers; the central chandelier is a volumetric repetition of the same motif that decorates the entire ceiling, easily associated with the skyscrapers; the lamp above the bar is shaped like a surfboard and decorated with wooden shark fins.

A friendly atmosphere is provided by open structures: buffets, cupboards and a display case with grilled ducks. Everything is in sight, open, accessible, understandable! The twins Aleksandr and Vladimir Yudin designed the shelves, “office” chairs, tables and sofas with leather inserts, while the KATANA chairs were ordered from the studio of the famous Ukrainian interior designer Pavel Vetrov.

A wall covered with greenery in one of the main rooms resembles the atmosphere and conveys the warmth of the Californian villas (half-open to let in the sun and so life and beauty of nature right into the courtyard!).
The interior decor is characterized by a surfboard shelf above the bar, a panel made of reels from spinning rods and portholes in the doors, as echoes of the ocean image which brings to mind sushi rolls and seafood in general.

The bathrooms are decorated in onyx, with unusual tiles and the effect of mirrors reflecting in each other. The columns in the corridor and the WC are decorated with a vertical logo – not a usual ornament that resembles either hieroglyphs or the sun and the trail that it leaves on the surface of the ocean, set below the horizon.

In the spring of this spring, the founders of the studio YUDIN Design, Vladimir and Aleksandr Yudin, started decorating the restaurant’s summer terrace in order to comply with COVID safety standards and to ensure the restaurant’s smooth operation in any condition. The site is made in the form of a straight gallery, which is closed on one side by Japanese screens (so as not to look at the roadway). The floor is covered with a grid, under which there are radiators, as designers drew this idea from the popular cinema images of streets in American metropolitan areas: mesh, asphalt. Finally, the designers combined it with a red table, a symbol of the Chinese Empire. 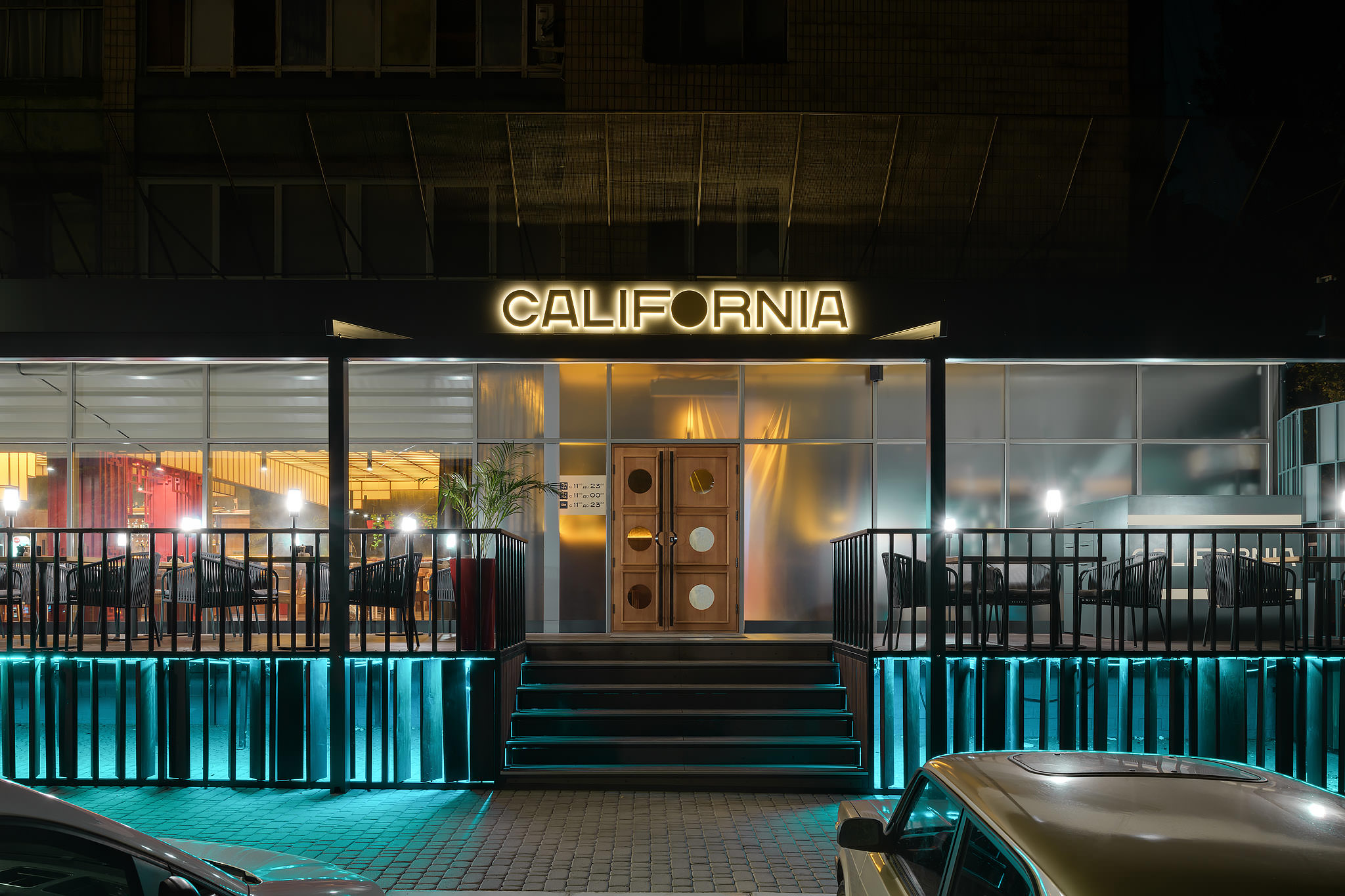 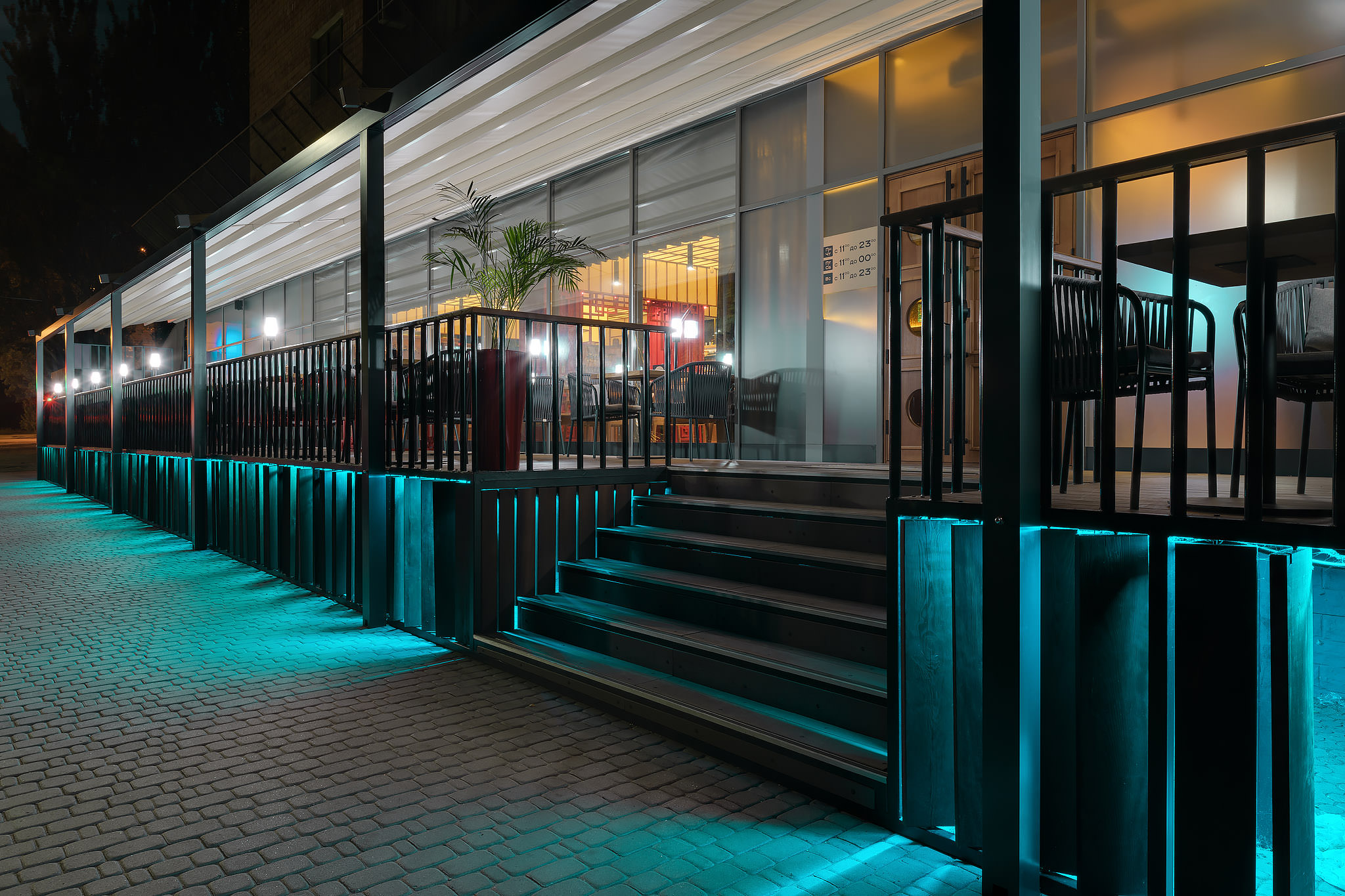 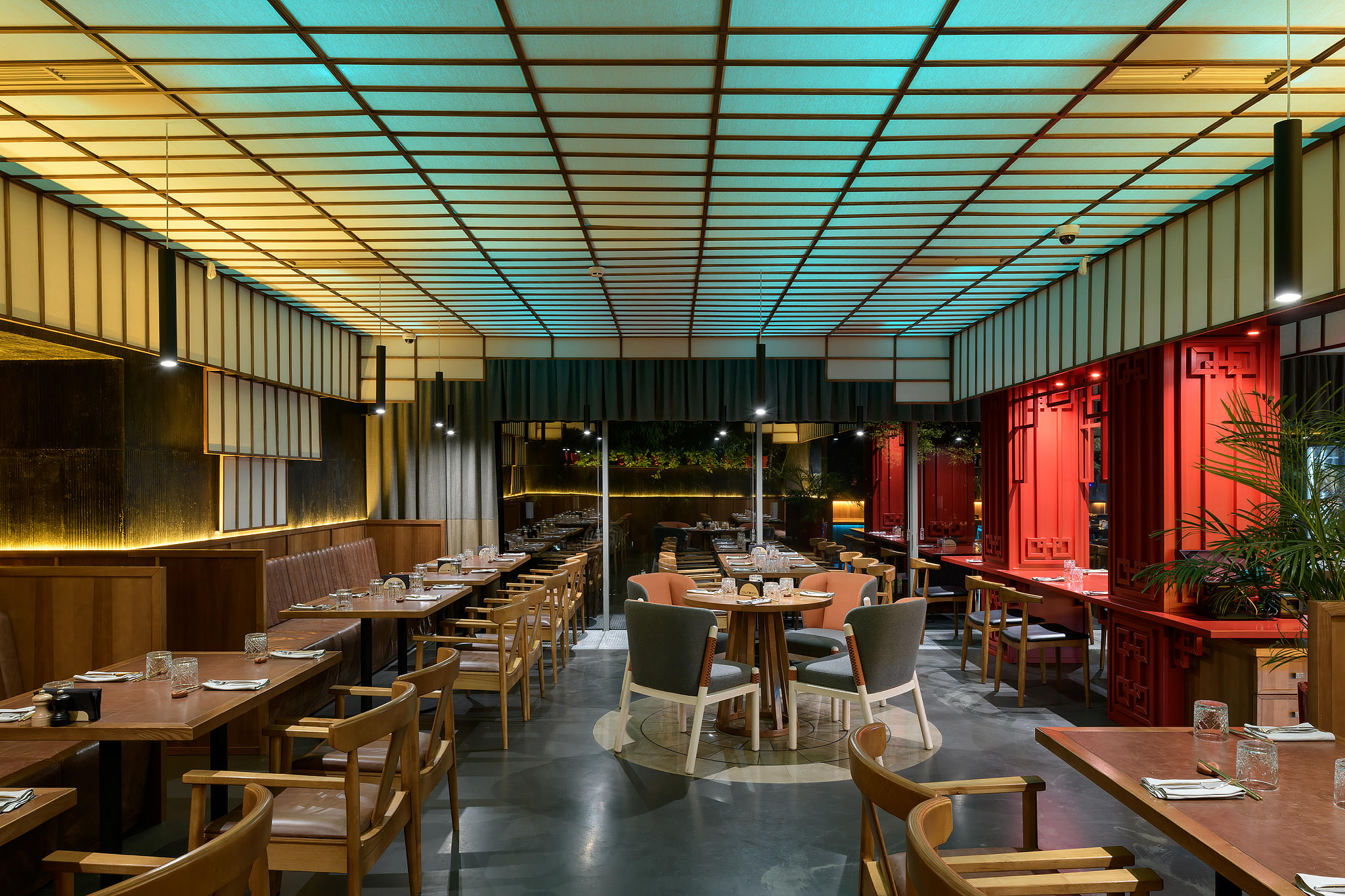 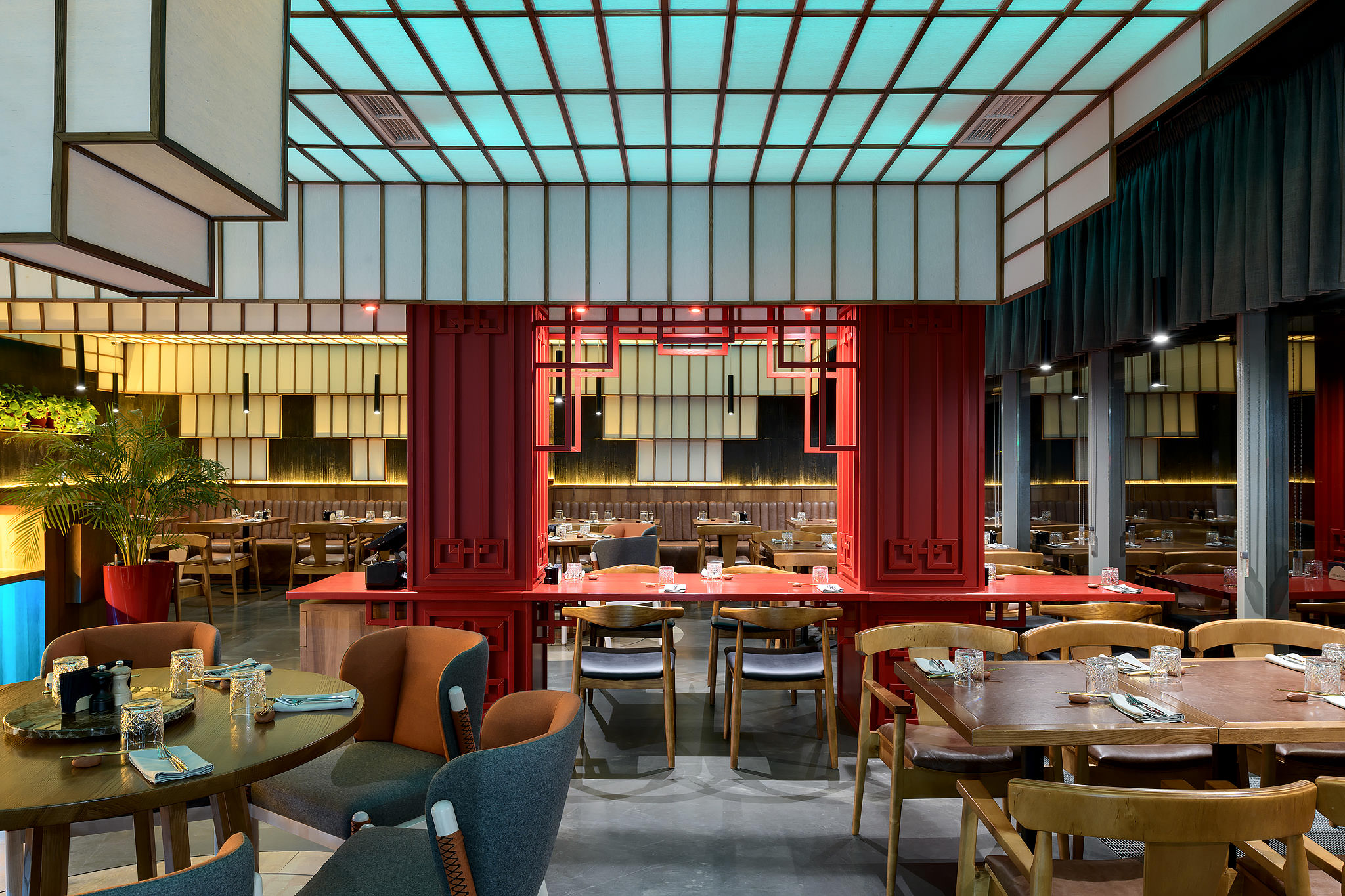 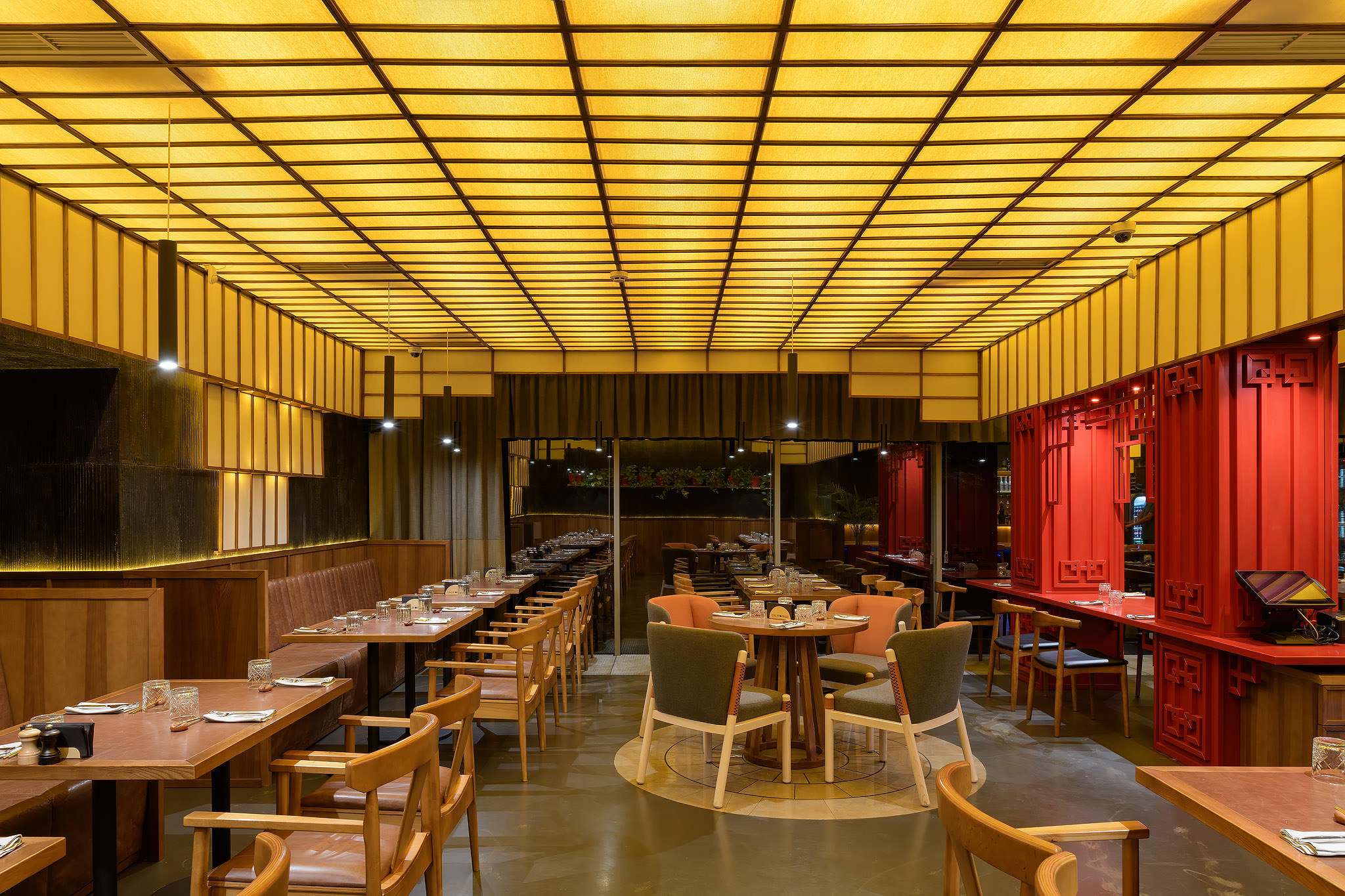 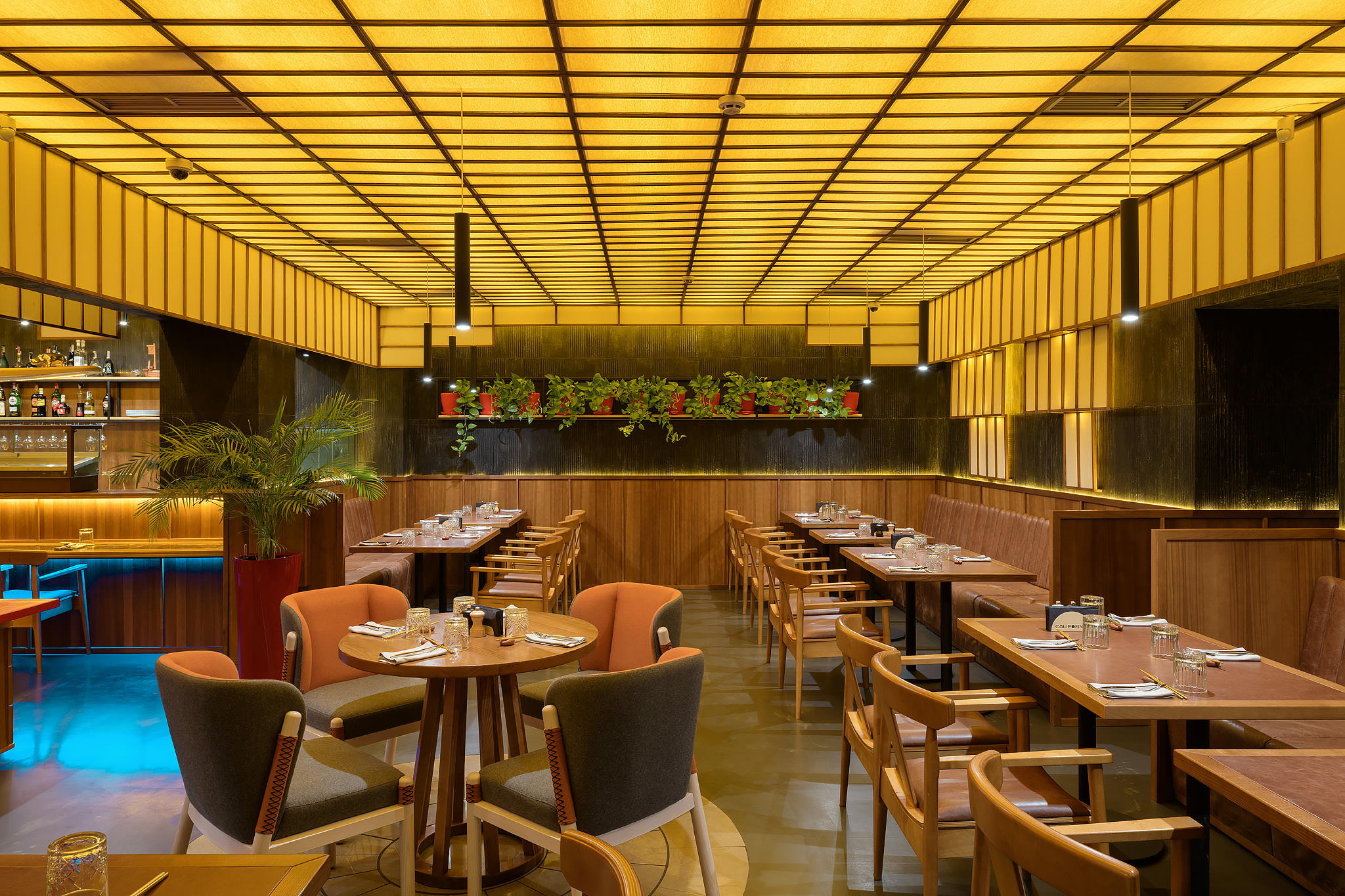 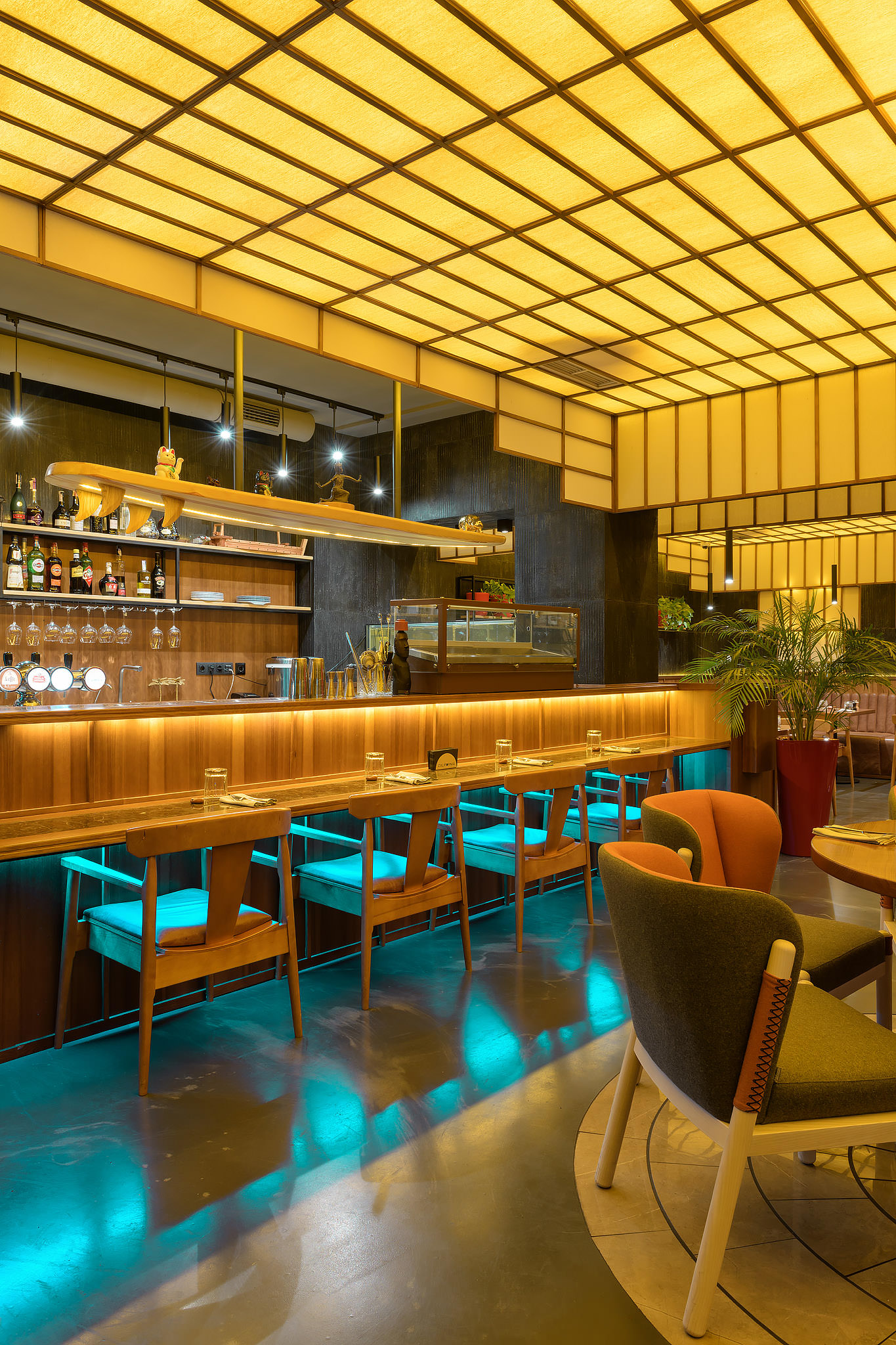 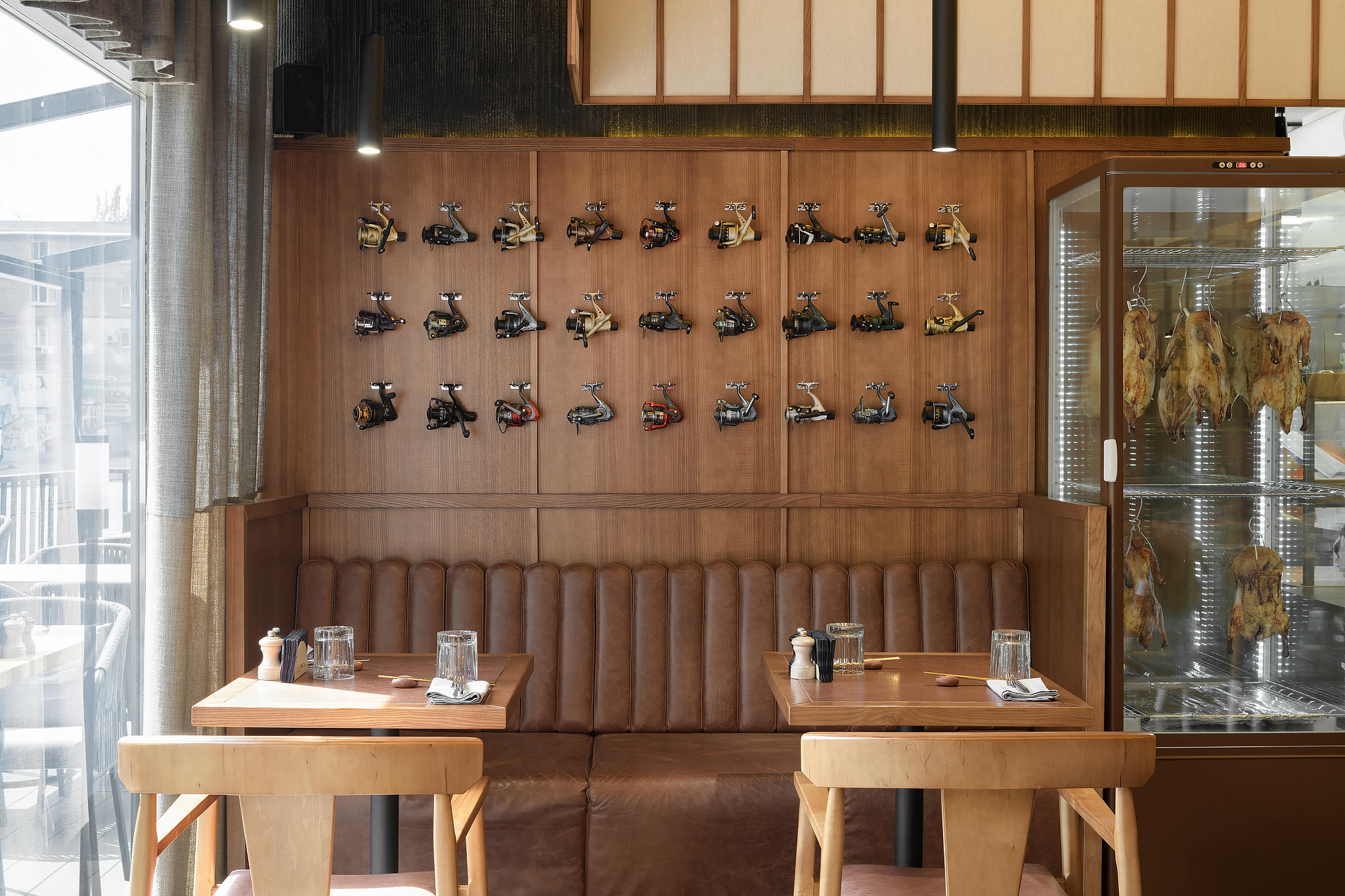 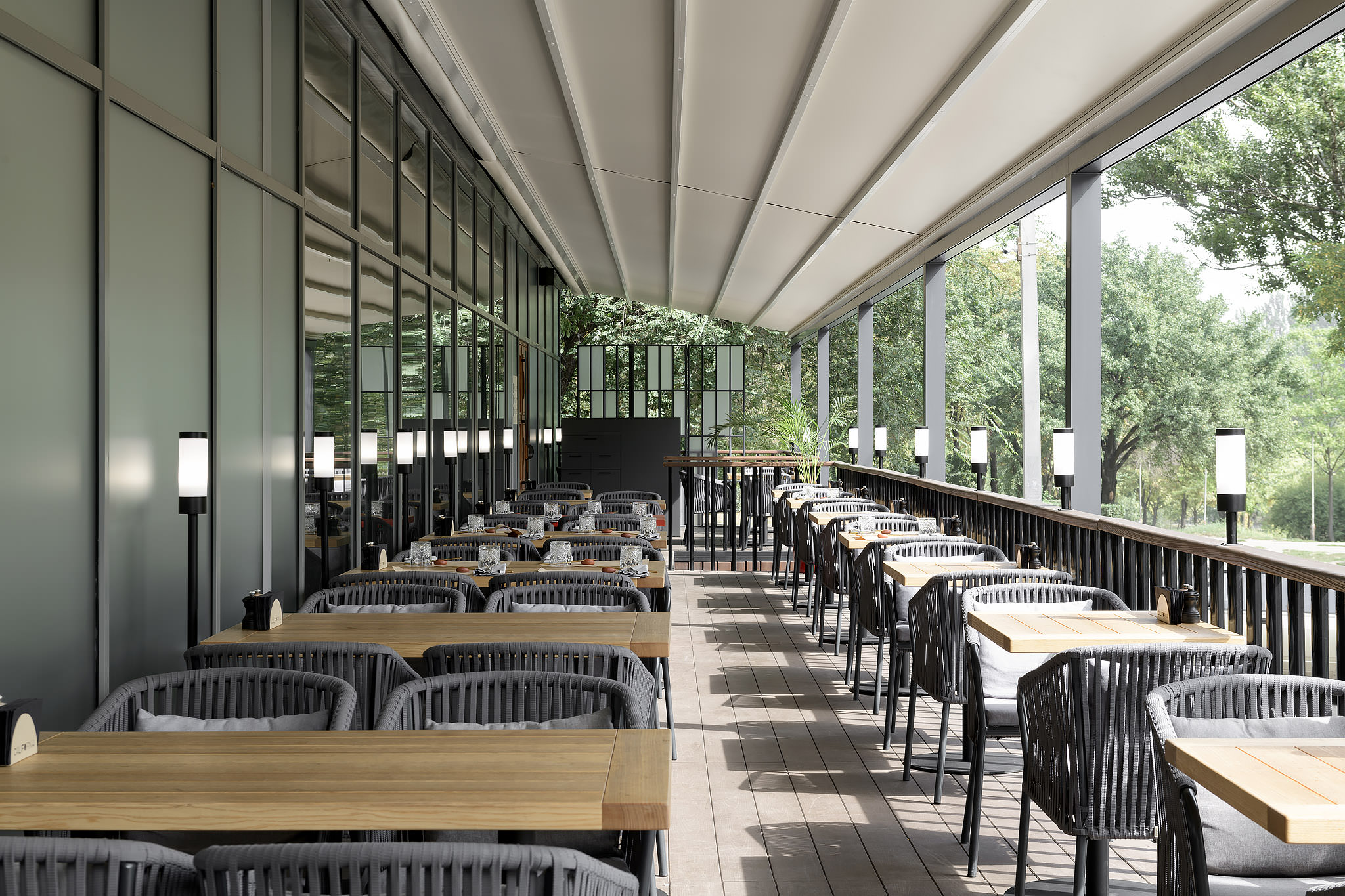 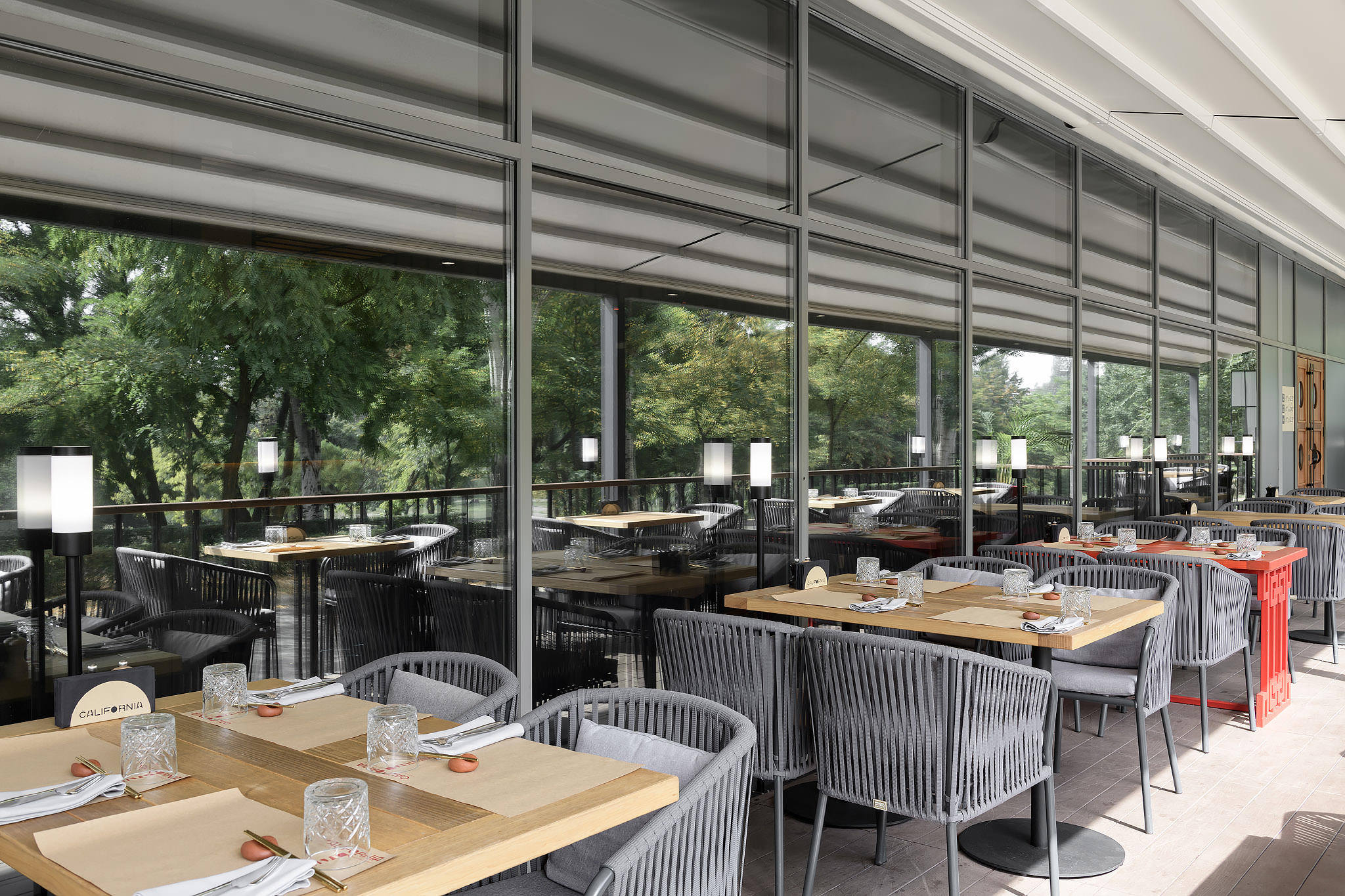 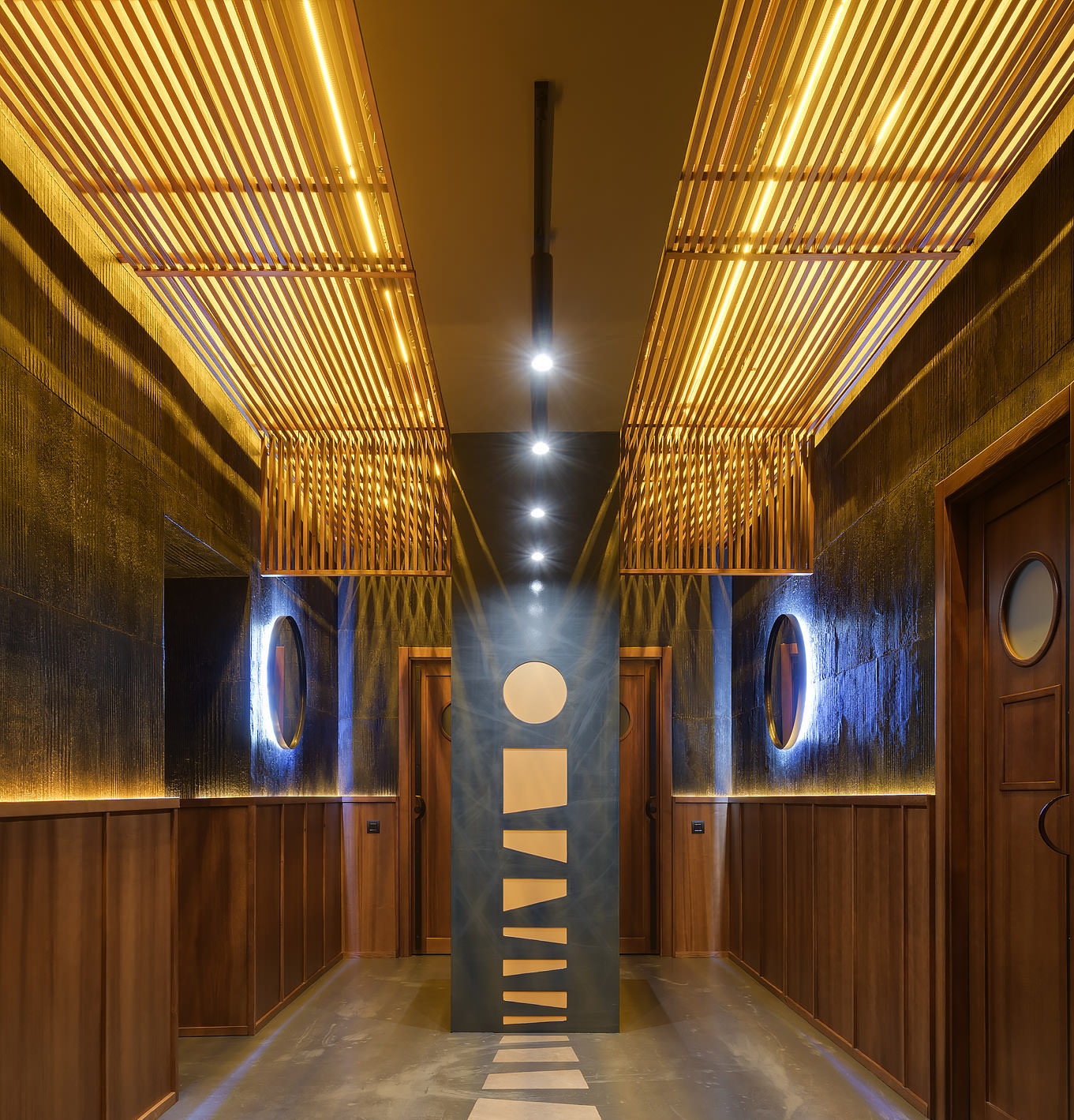 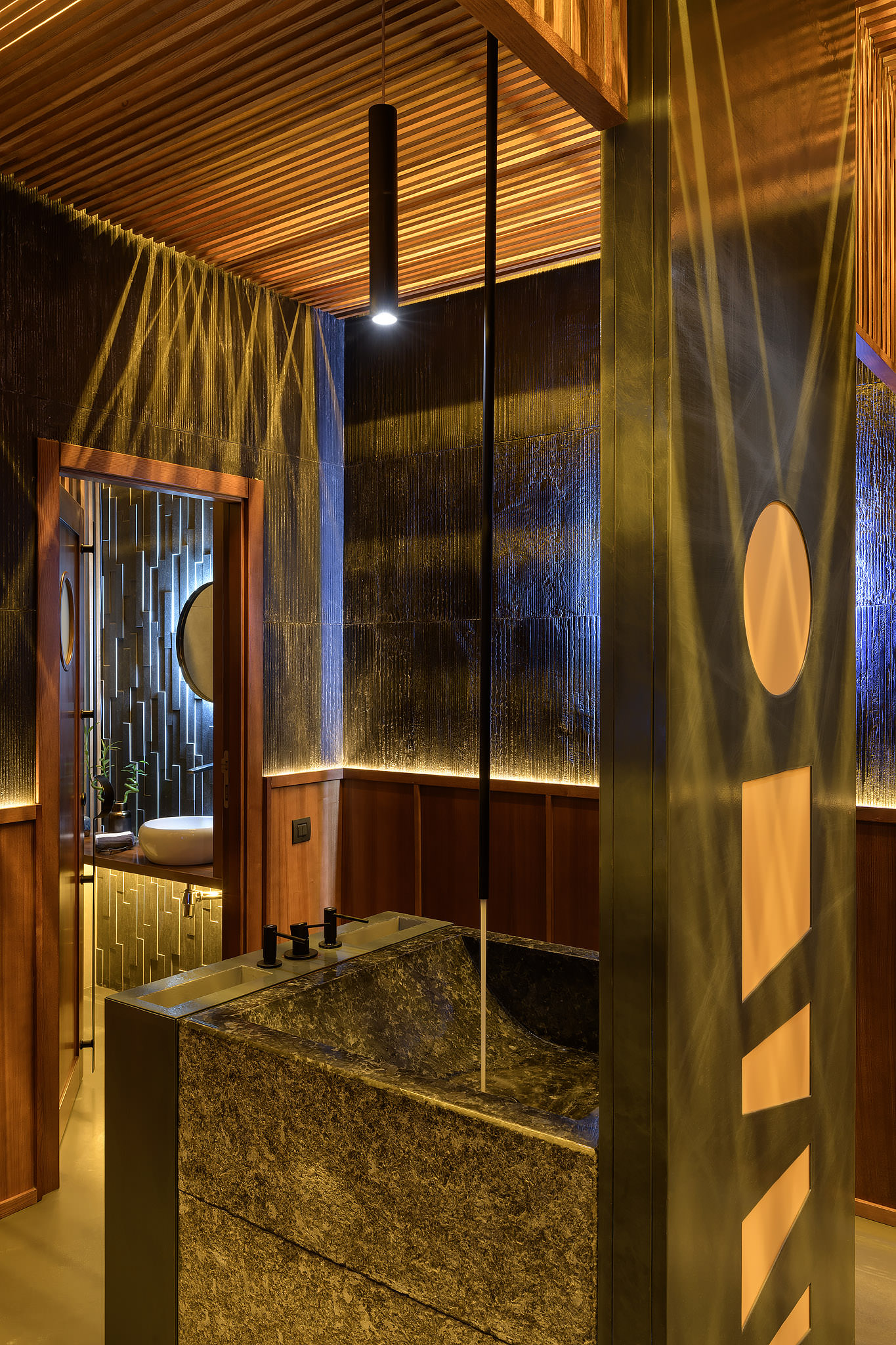